Dawley is notable as the birthplace of Captain Webb, the first man to swim the channel. It is a small town in the borough of Telford, Shropshire.

This dance was originally learnt at a workshop run by Roy Dommett.

He was doing morris research in the Vaughn Williams Memorial Library, back in the early 1960s, when he was recommended to visit a woman who lived in Telford.

Most of the dances the woman talked about had been danced by 8–10 people, but this one had been used when they were short of dancers as it only needed five people.

Historically, it would have been danced with short sticks as they allowed fast, precise moves. The costume worn by the Dawley dancers was not tatters, but a shirt with crotal bells sewn onto it. For the uninitiated, crotal bells are round bells made of pewter or copper with a metal ball inside.

The dance given here is largely as Roy taught it with only one real change. The final figure as taught simply had number 5 go to the back of the set and be picked up by the other dancers to be carried off. We felt that there ought to be a reason for him to be carried off, so we added the rest of the figure that is shown below.

After doing a lot of hunting for more details on this dance, it seems likely that all/most of it was a recreation by Dommett based on the little surviving information that he had, rather than being an accurate reproduction of the original dance. 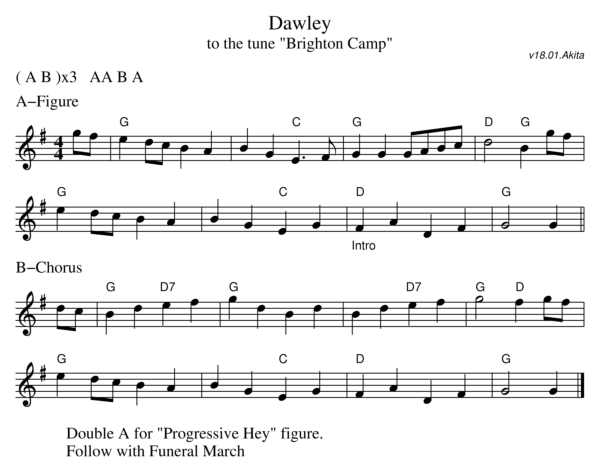 During the carry off in the final figure, the opening bars of the funeral march is played.

This is a dance for five people. Numbers 1-4 are arranged in a square in the usual manner. Number 5 stands at the front of the set, forming a triangle with 1 and 2.

Number 5 acts rather like a fool in this dance, often going through or around the other dancers. We've chosen to emphasise the fool aspect by making him visually different and giving him a different stick.

It will be helpful if dancers 1 and 2 are a similar height, likewise dancers 3 and 4.